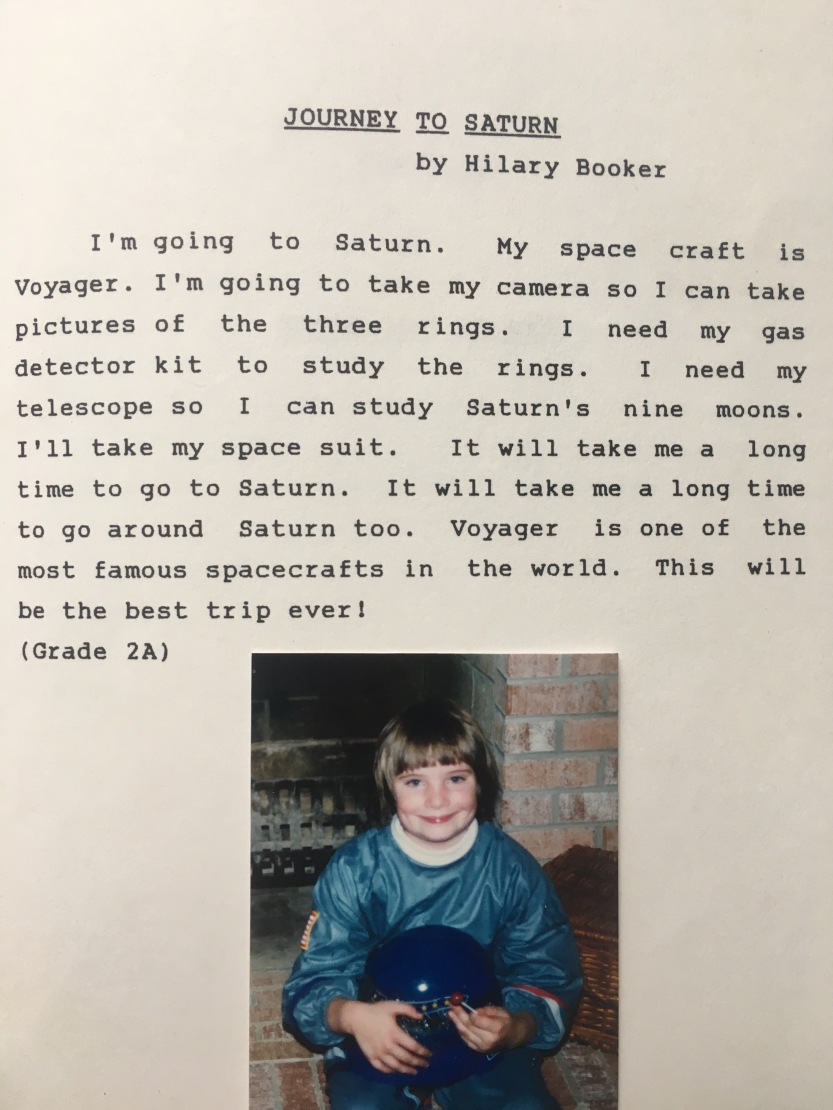 When I was in the first grade, my class was visited by 8th graders who were studying a unit on space (sounds like an alien encounter). I’m not sure exactly what intrigued me, but that was the beginning of an obsession with the solar system, the universe, “outer space”. I was convinced for years that I wanted to be an astronaut. My dad helped me make my own model of the solar system, like, the NEXT DAY. It was a 3-D model—in a grand tradition of my father and I proving that we can’t be left to our own devices in craft shops. Each planet was painted, proportioned as well as possible given the limitations of Styrofoam ball sizes and hung in orbit in a box painted dark blue covered in gold metallic stars and glitter (stardust). My mom (seamstress extraordinaire) made me the MOST amazing astronaut costume for Halloween one year.

I think you already know this, but, I didn’t become an astronaut (though, that doesn’t mean that I won’t end up in outer space one day). I have become an astrologer … which means that I still study and observe the planets and their orbits. I still marvel at “outer space” and then, as an astrologer, I meditate upon how that activity in outer space reflects the activity of the “inner space” of our souls and psyches. I think that studying the orbits back in first grade made it easier for me to understand a lot of phenomena today—phenomena like eclipses. To eclipse means to cut off. In astrological and astronomical terms (these haven’t always been separate areas of study, btw), light is eclipsed. During a lunar eclipse, the Earth comes between the Moon and the Sun and cuts off the light of the Moon. During a solar eclipse, the Moon comes between the Sun and the Earth and cuts off the light of the Sun.

We are now five days into Eclipse Season. This particular Eclipse Season is powerful, especially for those in the United States because the full solar eclipse will be visible across the country. During eclipse seasons, the actual eclipses arrive in pairs – a lunar eclipse and a solar eclipse. The actual eclipses pack the punch, but they are foreshadowed throughout the entire lunar cycle in which they occur and tend to resonate for the following six months. The first eclipse season of 2017 happened back on February, with a lunar eclipse on February 10th/11th in the sign of Leo and a solar eclipse on February 26th in the sign of Pisces. That eclipse season opened up a portal, created a shift that will find completion over the next month.

The theme from one set of eclipses continues from season to season because the eclipses occur in similar spaces in the sky, even as they move slowly through the zodiac. A lunar cycle is a new moon through a new moon. A lunar cycle lasts for 28 days, but eclipses are portals that shift senses of time. So 28 days can feel like 28 minutes or 28 years. Eclipses pull the certainty out from underneath those who feel them most. What is normal either disappears or feels strange. What is normally hidden reveals itself. You can learn a lot about yourself and those with whom you surround yourself during an eclipse. What is being revealed to you now about yourself and others? What seems uncertain? What is emerging and feels new? Where are you letting go?

How eclipses affect people and the extent to which they affect them depends on where they fall in a person’s chart and how prepared a person is to answer the call of the eclipse. If you would like to learn more about how these eclipses will affect your chart and talk about what is emerging from your inner space, please contact me for a session at HilaryB130@gmail.com.

One thought on “Outer Space/Inner Space: An Intro to Eclipse Season”